Did you know it's only been relatively recently we’ve developed words to actually describe blue?

Sympatico’s new shade, Sapphire, almost didn’t happen. The dye lot was in the works when my dyer closed as part of the pandemic response. But thankfully, since he's a small operator like me, he and his daughter were able to complete the work during the shutdown. For photography, I became model for a day and my partner, Marty, was pressed into service along with our aging camera to snap the shot.

With all the variations in monitors and mobile device screens we use these days, depicting a color with accuracy online is pretty much guesswork Still, I think we did quite well color accuracy-wise, and with any luck, the screen on which you’re looking at this will also render Sapphire fairly accurately. (By the way, I’m always happy to mail fabric swatches on request. Just call me at 541-899-3988 or send me an email here.)

I settled on Sapphire’s specific shade because of its clarity and cleanness. I like the way Sympatico’s hemp/Tencel fabric gives the Sapphire an earthy look, rich but toned down just a tad. And as is the case with most shades in the Sympatico collection, it coordinates well with most of the Sympatico palette. 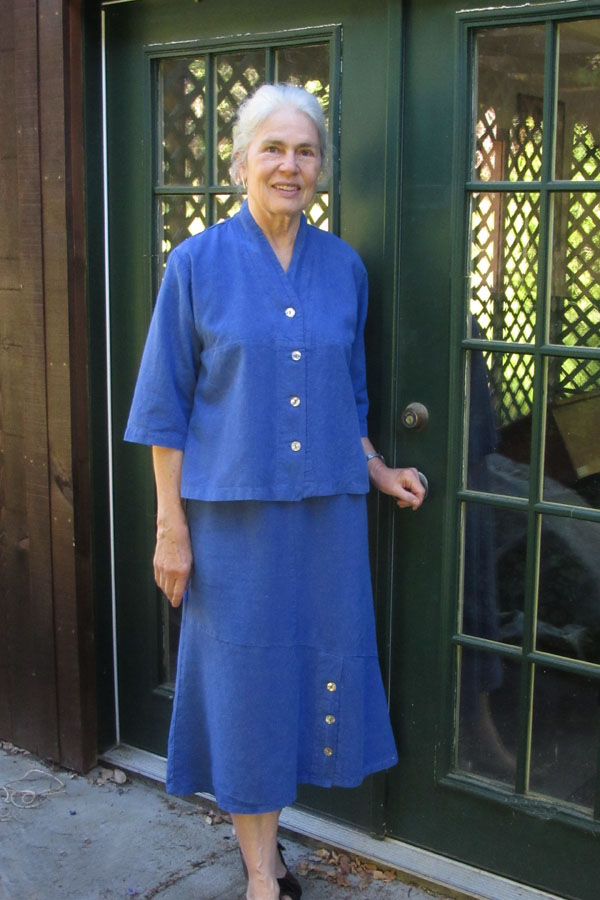 How we think and talk about colors and pigments

In thinking about how Sapphire should look and how I could describe it, I stumbled upon a fascinating piece on NPR recounting the accidental creation of a brand-new blue in 2009 at an Oregon State University lab. In experimenting with materials intended for use in electronics, a grad student noticed when three metal oxides were heated together, the result was a brilliant blue. Quoting French scientist Louis Pasteur who famously created a vaccine for chicken cholera by accident, lab professor Mas Subramanian told his student, "Luck favors the alert mind." They had discovered a new pigment of blue, the first in over 200 years.

Equally interesting, the NPR story also offers a brief primer into the nature of light versus pigment and why using an inorganic material such as YInMn Blue may be less expensive than using an organic material like the rock lapis lazuli to create a deeper blue, ultramarine.

The NPR story in turn led me to an Australian article with the provocative headline, “No one could see the color blue until modern times”. As the story tells it, until lately, a close study of languages such as Hebrew, Chinese, Japanese, and Greek reveals that historically none of them had a word to describe blue. Which sets up a wonderful question to consider: Can you really see something if you don’t have a name for it?

Researchers have put that question to the test by showing patterns containing blue and green elements to members of the indigenous Hima people of Namibia, whose language has no word for blue. Test subjects either could not recognize the blue elements at all or struggled to do so, making mistakes.

Traipsing through this history has only underscored my previous feeling that language is often a very imperfect medium for conveying color. Whoever came up with the aphorism, one picture is worth a thousand words, really said a mouthful, especially where colors are concerned.