This ancient dyestuff has a fascinating and dark history, but new plant-based forms hold promise for eco-friendly clothing. 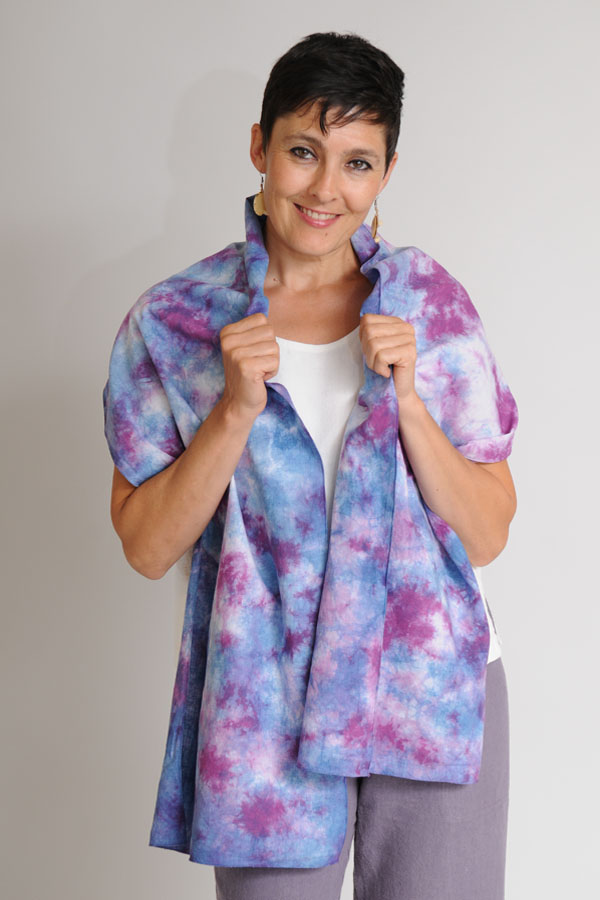 I only dipped the Impressionistic Scarf/Wrap in Hemp/Tencel a few times to produce lighter shades of blue. Indigo color deepens with every dip.

Humans have obtained indigo from a number of plants that grow in Europe, Asia, Africa, and the Americas for millennia. They all contain indican, from which the indigo is produced. Regardless of the plant source, the indigo itself is the same and works the similarly on textiles. Dyeing with indigo has been going on for more than 6000 years. And as with other sought-after commodities such as tea, coffee, sugar, and opium, this dyestuff has had a checkered history on the global-trade stage. Slaves were used in the US, Africa, and the Caribbean to grow and harvest it. Although it's nontoxic and even used topically in some cultures as a medicine, indigo dye can become toxic if taken internally in large-enough quantities. To harvest the indigo plants, plantations relied on slave or very cheap labor.

Applying indigo is a much more complex process than working with other dyes, both natural and synthetic. It’s also endlessly fascinating to me. Preparing a dye bath is as much art as technology when it comes to getting the fermentation process just right. Once you hit the sweet spot, it can be tricky to maintain the action of the dye and involves holding a warm temperature—I often use a hotplate set on low heat to keep the dye bath active. But the dyebath inevitably changes somewhat over time, getting weaker and weaker with each application. 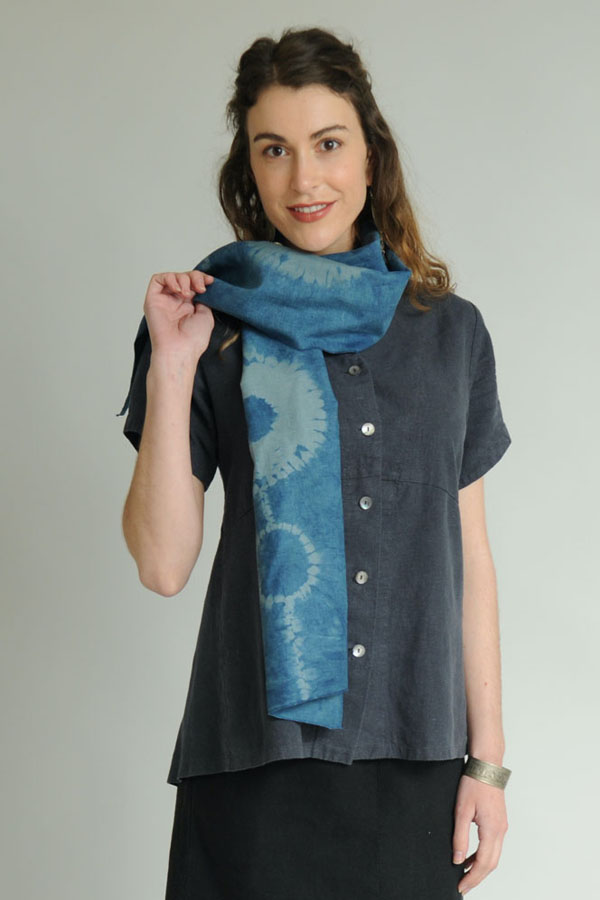 I dyed the Everything is Everything Scarf using plant-based indigo and shibori in successive dips to create the design on hemp/Tencel.

Indigo dyeing seems magical to me. When dipping fabrics in a dye bath, they emerge yellow, but before your eyes, as the fabric is exposed to air, it begins taking on a blue shade. Successive dips result in teal, then blue. Just how deep a shade of blue depends on the number of dips, the strength of the dye bath, and the receptivity of the fabric.

Indigo from plants versus synthetically produced indigo are identical chemically other than in their carbon molecules. The carbon is plant-based with natural indigo whereas the synthetic indigo contains carbon derived from petrochemicals. It takes a specialized test to detect that difference. And as is the case with most issues in global trade, it’s the financial bottom line that counts. Commercial synthetic indigo sells for a tiny fraction of its plant-derived counterpart. Therefore, natural indigo is used largely in artisan-made apparel.

There’s good news on this front though. A company called Stony Creek Colors has developed a tropical legume that’s native to the Americas, seeking to produce a consistent form of indigo at scale. The company warns that due to crop-to-crop variations, natural indigo will always need more hand-holding than its synthetic equivalent. Brands such as Levi’s, Patagonia, Nudie Jeans, and Wrangler have begun making forays into this market, buying Cone Denim’s fabric that uses Stony Creek indigo. Though plant-based denim is a tiny part of the jeans market, as our dawning consciousness about the harm of fast fashion matures, that should change.