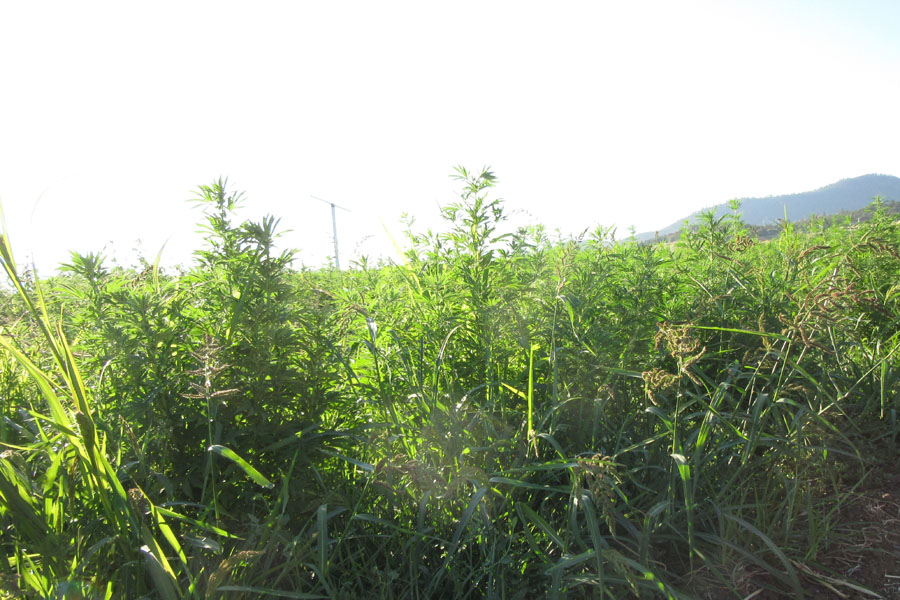 If it seems I’ve been a little obsessed about hemp lately, you’re right. I’m surrounded by the stuff! Since federal legalization of low-THC hemp late in 2018, agriculture here in Southern Oregon has been transformed. Virtually overnight, hemp has overtaken the traditional crop leaders, pears and grapes. In 2015, under a pilot state program, 105 acres of hemp were planted in Oregon. Through September 9th of this year, that number has grown exponentially to more than 62,000 acres.

But as I recently noted in a blog post, that enormous leap in hemp production comes with some questions and concerns. Not surprisingly, the question I field most often at my Lithia Artisans Market booth has to do with hemp for clothing. After witnessing the thousands of acres of hemp that have sprung up locally in the Rogue Valley, my customers are curious to know if I’ll be able to use some of that hemp to make clothes. Unfortunately, the short answer is no.

The hemp grown here has been developed to produce abundant cannabidiol-laden flowers. Cannabidiol, or CBD as its more commonly known, is just one of dozens of cannabinoids contained by cannabis plants. But CBD is getting a lot of the press lately for its therapeutic and other effects, many of them still poorly understood or documented from a scientific perspective. With legalization, numerous studies are under way that should help us better understand how cannabis in all its forms interacts with the cannabinoid receptors found in humans. Meanwhile, the wild-west atmosphere surrounding CBD hemp has some distinct negatives.

After seeing and smelling the skunky aroma of thousands of CBD hemp plants, the next thing you notice in most local fields are the long rows of plastic being used to suppress weeds around the plants. There are miles and miles of this plastic mulch locally, and most of it is neither recyclable nor biodegradable. The pungent smell of ripening cannabis buds is also an issue in itself, especially if you live downwind of big hemp fields. It can be overwhelming. And it’s not just the smell; many people report respiratory symptoms from exposure to flowering hemp. Because these hemp plants are intentionally not fertilized in order to maximize their CBD resin production, local hemp fields lack male plants with pollen that can serve as bee forage.

Although many CBD-infused products tout their purity, it’s unclear just how many growers are adhering to organic faming principles. Many of the farms now growing hemp have no history of organic cultivation. Because the federal legalization of hemp is a late-breaking development, the safeguards and certifications consumers need are lagging behind these crops. It may take some time before we begin seeing reliably certified organic CBD products. In passing the 2019 Farm Bill that legalized hemp, the US Department of Agriculture was directed by congress to develop specific hemp standards, and those standards are still forthcoming.

Hemp for fiber: not so fast

US-grown hemp for clothes and other industrial purposes has been eclipsed by all the buzz over CBD hemp. But there are exciting early developments in reestablishing hemp as a significant and sustainable crop in the US. Unlike those coddled CBD strains planted in plastic mulch with their wide plant spacing, hemp for fiber is planted tightly in rows about seven inches apart. As a vigorous, fast-growing crop, it chokes out weeds without need for plastic mulch. It has also traditionally been grown without use of chemical pesticides and fungicides. Hemp's substantial root systems help improve and aerate the soil.

Because best practices in the US for hemp cultivation are still a work in progress, it will be interesting to see how all this plays out. But it seems clear that hemp grown for fiber can be an important part of the burgeoning movement toward regenerative agriculture and away from farms dependent on fossil fuels. Winona LaDuke, an environmentalist, economist, and writer (and friend of Sympatico) is helping lead the way. A Native American initiative, Winona’s Hemp & Heritage Farm aims to not only raise industrial hemp but also create the infrastructure for processing the fiber—a bold and ambitious objective. Located in Minnesota, once home to 11 hemp mills, Winona’s initiative involves buying organic hemp from local farmers then processing it as part of of a movement that her organization terms the Indigenous New Green Deal.

To get to a place where domestically grown, organic hemp is a significant player in clothing and industrial products like insulation and cement will take time. But the sudden visibility of hemp and its enthusiastic adoption by a new generation of Americans augurs well for industrial hemp's future.