Today, the hemp in Nikki’s Princess Top is grown and processed using mechanization unavailable in the US.

Can hemp farming while Black offer a path to economic justice?

The Pew Charitable Trust came out with an article in 2019 after the federal legalization of industrial hemp that focuses on a relatively tiny demographic: Black farmers. The story profiles Clarenda Stanley-Anderson, a North Carolina farmer who’s spearheading efforts to get Black farmers enrolled in what she sees as the coming hemp revolution. Green Heffa, the farm she operates with her husband is serving as a testing ground for her concepts.

Black applicants have encountered obstacles in getting state licenses to grow hemp even though the 2018 federal farm bill legalized its cultivation nationwide. Institutional racism within the US Department of Agriculture has raised barriers. And tellingly, according to the Pew Charitable Trust story, the North Carolina Industrial Hemp Commission, whose nine members set regulations and licensing fees for the industry, is all male. All but one are white. None are Black. Two are from law enforcement. And many Black applicants are denied licenses on flimsy grounds.

A further irony occurred to me about the connections between cannabis and people of color. Historically, Black and Latinx people have been incarcerated over cannabis far more frequently than others. I think it would be a most remarkable turn of events for those same people to now bootstrap hemp into the focal point of a new entrepreneurial economic engine for the disenfranchised.

Green Heffa isn’t the only organization focused on hemp. The 40 Acre Cooperative in Minnesota has organized in a classically cooperative form to enable black farmers to raise and market industrial hemp with the intent to increase the number of Black farmers. There were nearly a million Black farmers in 1920. Today that number has dwindled to 45,000, a miniscule 1.2 percent of all US farmers.

As the co-op’s founder, Angela Dawson, lays out in an interview, the organization’s purpose is to reverse that decline in Black agricultural participation. She says, “Our mission here at 40 Acre Cooperative is to promote agricultural development, as well as economic equity for socially disadvantaged farmers. Because we know if all farmers had access to all the plentiful and rich agricultural resources available, we could solve many of today’s complex problems. All farmers gaining that access is what we’re here to do.”

Meanwhile, Green Heffa’s Stanley-Anderson recently became more visible when she was named the featured farmer during Hemp History Week, a campaign to educate consumers sponsored by the Hemp Industries Association. She reflects a growing interest among Black Americans to return to the land. The hemp boom has attracted the attention of famers both Black and White, and Stanley-Anderson believes that with the development of infrastructure, hemp can become a key crop in helping Black would-be farmers make that return.

I’ve blogged about hemp’s legal and agricultural history in the past, but it was coming upon a photo in an obscure US government publication that brought another aspect of this fiber to life for me. The early 20th century photograph depicts Black field hands on a hemp farm with one White man mounted on a horse. They’re performing one of several labor-intensive steps needed to transform hemp into fiber that can be dried, spun and woven. More grueling than the cultivation and harvesting depicted in the photo, the subsequent process of breaking down the fiber stalks over a wooden form was especially tough, labor-intensive work. 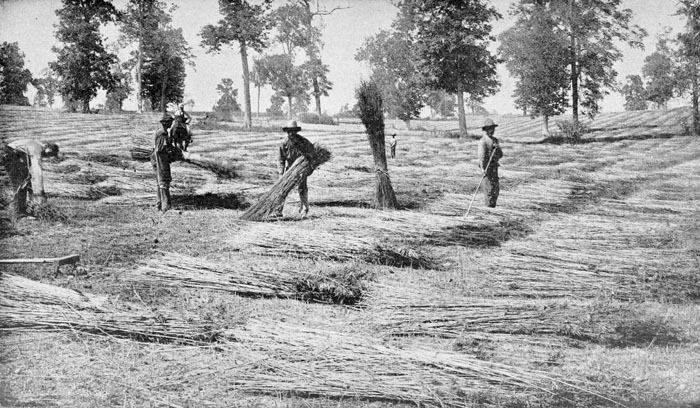 It’s celebrated that America’s “founding fathers,” including Washington and Jefferson, grew hemp on their farms. What is too often omitted is the fact it was slave labor that planted, cultivated, harvested, and processed the hemp. It was their forced labor that made hemp a viable crop. Given its many uses including providing oil for lamps, fiber for clothing, paper making and sail cloth, as well as animal fodder, hemp was a crucial field crop in colonial and post-revolutionary America.

The systemic racism that was a hallmark of hemp cultivation persists to this day, albeit in more subtle forms. During the Jim Crow era and beyond, poorly paid farm workers, mostly Black, continued to perform the backbreaking work. It was only with mechanization that these practices died out. Today, almost all hemp produced for fiber is grown and processed using machines that eliminate most of the human toil that slavery once provided. Unfortunately, virtually no fiber hemp is is being produced in commercial quantities in the US—yet.

I feel confident though that with all the resurgent interest in hemp and its acceptance by consumers, industrial hemp is poised to make a comeback. But before that can happen, there are obstacles to surmount.

The hemp processing machinery that was commonplace across America’s farms vanished with hemp’s prohibition in 1937. To reestablish hemp fiber manufacturing in the US will require a significant capital investment in machines to cultivate, harvest, process, spin, and weave hemp fiber. In the meanwhile, farmers seeking to grow hemp for fiber are limited in their options.

Some of the US startups growing hemp for fiber have have experimented with using machines developed for harvesting and processing linen. This equipment isn’t optimal because hemp stalks are about double the length of linen, necessitating hemp fibers be cut to shorten them. But we’re not talking rocket science when it comes to reestablishing the US ability to process hemp for fiber. The tractor implements and fiber handling equipment required for hemp can be adapted from equipment designed for other fiber crops. It will take a combination of consumer demand and viable economics to reestablish hemp for fiber on American farms.

I will be watching the development of efforts like Forty Acres and Green Heffa with keen interest. They could turn out to play a germinal role a reborn hemp fiber industry here in the US—a development that would be good for people, the environment, and hemp clothing companies like Sympatico that are currently dependent on imported hemp fabrics and fibers.