But progress is happening on the agricultural front with hemp for fiber being cultivated in the USA.

Back in the late 80s my friendly fabric supplier, Lawrence Serbin, came upon some intriguing information: the human brain and body hosts the endocannabinoid system. A complex network of receptors, the system effects our appetite and mood, as well as our sense of pain and wellbeing. Lawrence went on to write his thesis on the system with the idea of entering medical school. 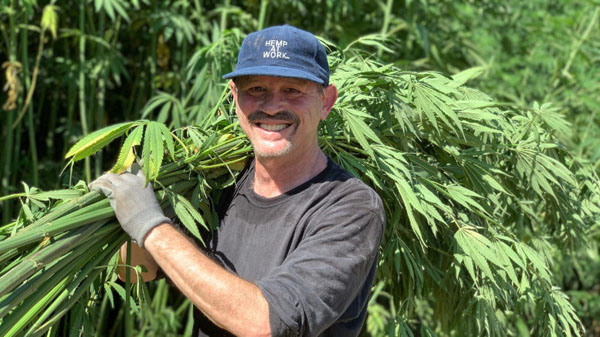 My friendly supplier Lawrence Serbin is pioneering the move to a resurgent hemp industry in the US.

But Lawrence's awareness and appreciation for the non-psychoactive form of cannabis — hemp — was soon sparked, derailing plans for a future in medicine. His resolve to become involved in the essentially non-existent hemp industry grew out of an encounter with a group of cannabis enthusiasts, including the celebrated hemp advocate, Jack Herer. I should say at this juncture (as Lawrence does) that he’s the world’s least likely stoner and positively responds to tags like “hemp nerd.”

Lawrence's encounter as he describes it in  this interview with Global Hemp, is like something out of a Cheech and Chong movie, and isn’t to be missed! You can fast forward to around the seven-minute mark, but hemp nerds may want to see the whole interview. Acknowledging he might have caught a buzz in the smoke-filled room in which the encounter took place, he experienced what he terms a eureka moment. He was going to get in the hemp business and get rich quick! Needless to say, things didn’t quite pan out that way.

We can grow industrial hemp, but the processing piece is still missing

Beginning around the 40-minute mark of the above interview, Lawrence discusses the challenges still facing a hemp textile industry in the US. As he points out, the textile industry ship sailed decades ago when we dismantled America’s industry and began sourcing clothes made in the developing world. As Lawrence explains, we can definitely grow hemp for fiber in the US, especially in the many areas where it was grown for fiber in the past. 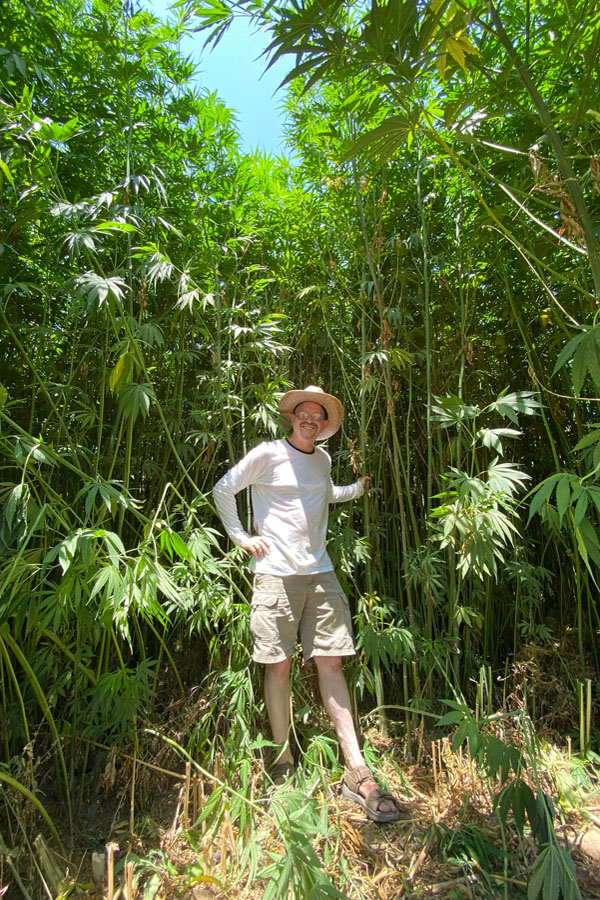 Lawrence Serbin stands among the towering hemp stalks in his California experimental crop.

Lawrence's recent experimental crops in California’s Central Valley have proven growing industrial hemp’s viability. The decortication process in which the fiber is separated from the hemp stalk isn’t especially challenging according to Lawrence. However, harvesting fiber that’s 99.9% free of vegetable matter and even dust is more challenging as are the processes of spinning and weaving or knitting the hemp into textiles. These steps will require big capital investments.

On the other hand, non-woven applications of industrial hemp such as manufacturing building materials and products such as automotive sound-deadening panels are a lot simpler to implement. But even these products require a steady supply of large quantities of hemp.

Wouldn’t it be great if we “grew” hemp clothing here in the US?

In the meantime, the fabric Lawrence imports is transported by ship, which is not only the most economical way, but the most environmentally positive way to move the goods so far. He goes on to explain that shipping the fabric from China to his warehouse in the Los Angeles area actually costs less than shipping that same fabric via truck to San Francisco! It’s critical, he says, that we have processors located close to where hemp is grown for maximum efficiency.

It should be noted that ocean freight costs grew a staggering 400% in 2021, largely due to the pandemic. Prices are unlikely to drop back to pre-pandemic levels. This may give more incentive to the nascent industrial hemp industry in the US. Time will tell.

In the meanwhile I am grateful for having Lawrence as a supplier. He’s reliably kept the wheels of Sympatico turning for years and makes this process of running a micro business a far more rewarding experience.