Some of clothing’s biggest negative environmental impacts happen long after it's sold.

New research at the University of York in England has shed light on why our armpits get funky. For years scientists believed the source of body odor was the mantle of microbes that lives on our skin. But just recently, researchers discovered they were only indirectly responsible It turns out the musky scent found in our armpits and nether regions is mostly the byproduct of a specific bacterium, Staphylococcus hominis, which feasts on compounds released by our sweat glands. It is an enzyme produced by these bacteria that is primarily responsible for body odor (BO). 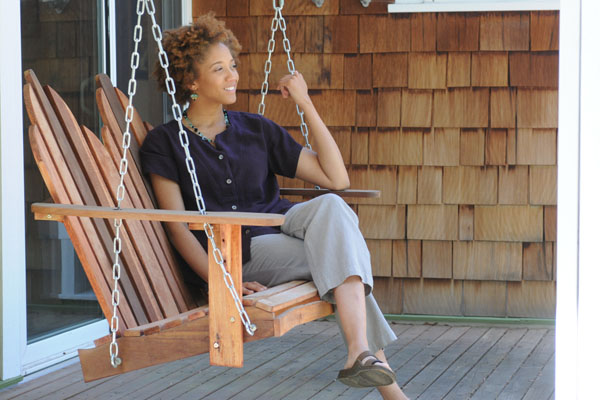 Thanks to hemp’s antimicrobial qualities, you’ll likely launder the Swallowtail Top and Stovepipe Pants less often. And that’s good for the clothes and our planet!

The research, conducted in collaboration with personal-products giant, Unilever, holds the promise of deodorants designed to deal more precisely with body odor. Targeting the specific bacteria responsible for unappealing scents would leave the rest of the microbial community that lives in our armpits undisturbed. And as we learn more about the symbiotic relationships between us and the critters that live on us, that’s probably a good thing.

The science behind understanding body odors may be making breakthroughs, but there’s also plenty of evidence to suggest we launder our clothes far too often. Combined with the environmental impacts of raw-material production, processing, and end-of-life waste production, how we launder our clothes becomes part of the equation. As I blogged about  here, we often toss clothes in the hamper out of habit rather than because they really need washing. That’s especially true of natural fibers that tend to reduce the funk factor, particularly so with hemp, which has antimicrobial properties.

If you needed any further convincing that laundering less is smart for our clothes as well as the planet, a  study by sustainability consultants McKinsey & Company should help. While the impact of the apparel industry on climate change is well documented, the industry also impacts biodiversity profoundly. With up to 20 percent of all marine and terrestrial species facing extinction in the short term, the role clothing production plays in that process is critical.

Although biodiversity is a distinct issue separate from climate change, the two are inextricably linked—these processes are interdependent and mutually reinforcing. Measuring greenhouse gas emissions is relatively simple, whereas understanding biodiversity is necessarily complex. It affects every environment and natural resource: oceans, soils, forests, freshwater, flora and fauna. Setting targets for biodiversity and measuring results in such a complex matrix is far more difficult than toting up greenhouse gas emissions.

What the McKinsey & Company study reveals is the relative negative impacts of the various steps throughout apparel production. It is the production of raw materials and their processing at the beginning of the apparel value chain and the waste production at the end of the apparel's life that have the biggest impacts on biodiversity. But as noted in the graphic below, the period referred to as “Product-use life” exerts its toll on water use and chemical pollution as well. I’m not clear if the microfiber pollution I’ve blogged about  before is considered chemical pollution or waste production. It would seem a case could be made for both. 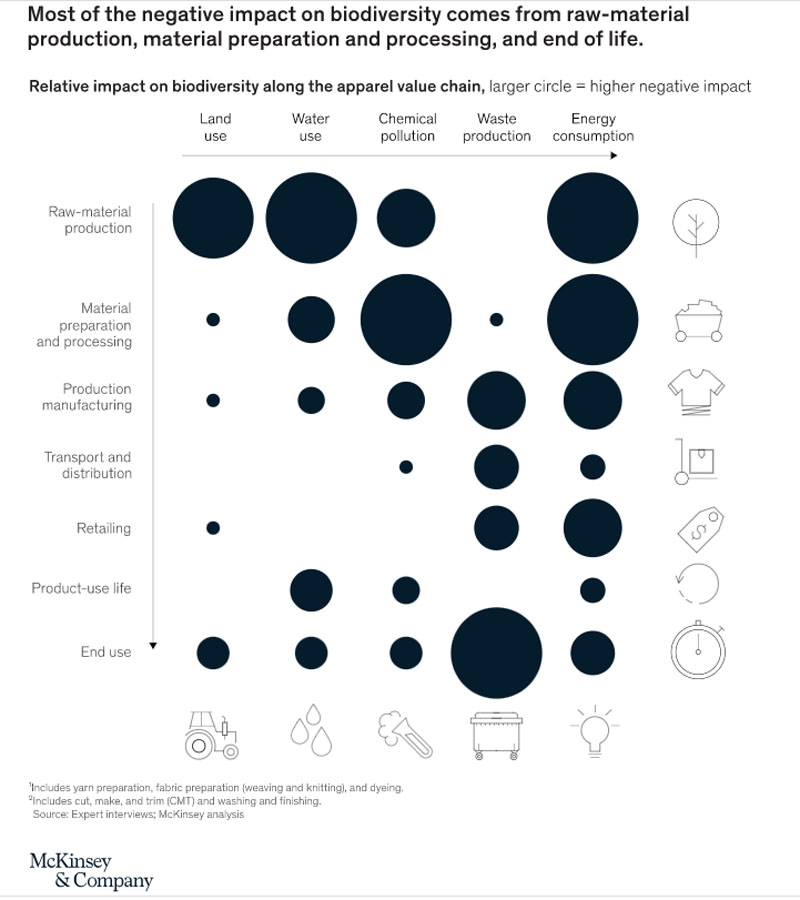 The study goes on to identify the apparel industry’s five main contributors to biodiversity loss:

Cotton agriculture: Due to the intensive use of insecticides and pesticides, cotton accounts for 22.5 percent of all such chemical use, even though cotton only occupies 2.4 percent of global cropland. Cotton is also a water hog. By some accounts, a single tee shirt requires 713 gallons of water. Conventional cotton is grown using synthetically produced fertilizers that contribute to big agriculture’s destruction of soil biodiversity.

Wood-based and synthetic cellulose fibers. It’s estimated that some 150 million trees are felled every year to produce these fibers. While many of these trees are grown in plantations that are certified as sustainable, up to 30 percent of cellulosic fibers come from endangered and primary forests. Water and soil pollution resulting from pulp processing cause habitat loss and endanger species. (Thankfully, the Tencel fiber used in Sympatico’s fabrics is produced in a closed loop, algae-based process that neutralizes and purifies water used in processing before it is returned to the environment.)

Textile dyeing and treatment: Roughly 25 percent of all industrial water pollution comes from dyeing and other finishing processes.

Waste: Almost three quarters of all discarded apparel is incinerated or ends up in landfills. Less than one percent is recycled in a closed-loop system. And just 12 percent of textile waste is downcycled into its component parts. It's estimated that each hectare (about 2 1/2 acres) of a single landfill will contribute to the loss of anywhere from 30 to 300 species. 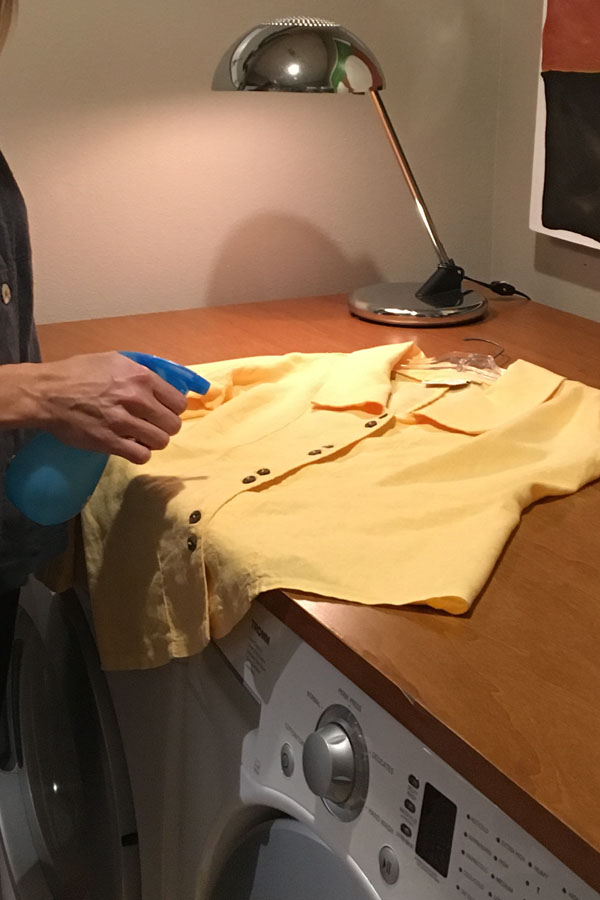 Spot cleaning can save time and energy.

What you can do to lighten your environmental impact

As we become more conscious consumers and realize the links between biodiversity ands climate change, I believe the fashion industry will change for the good by reflecting that growing consciousness.